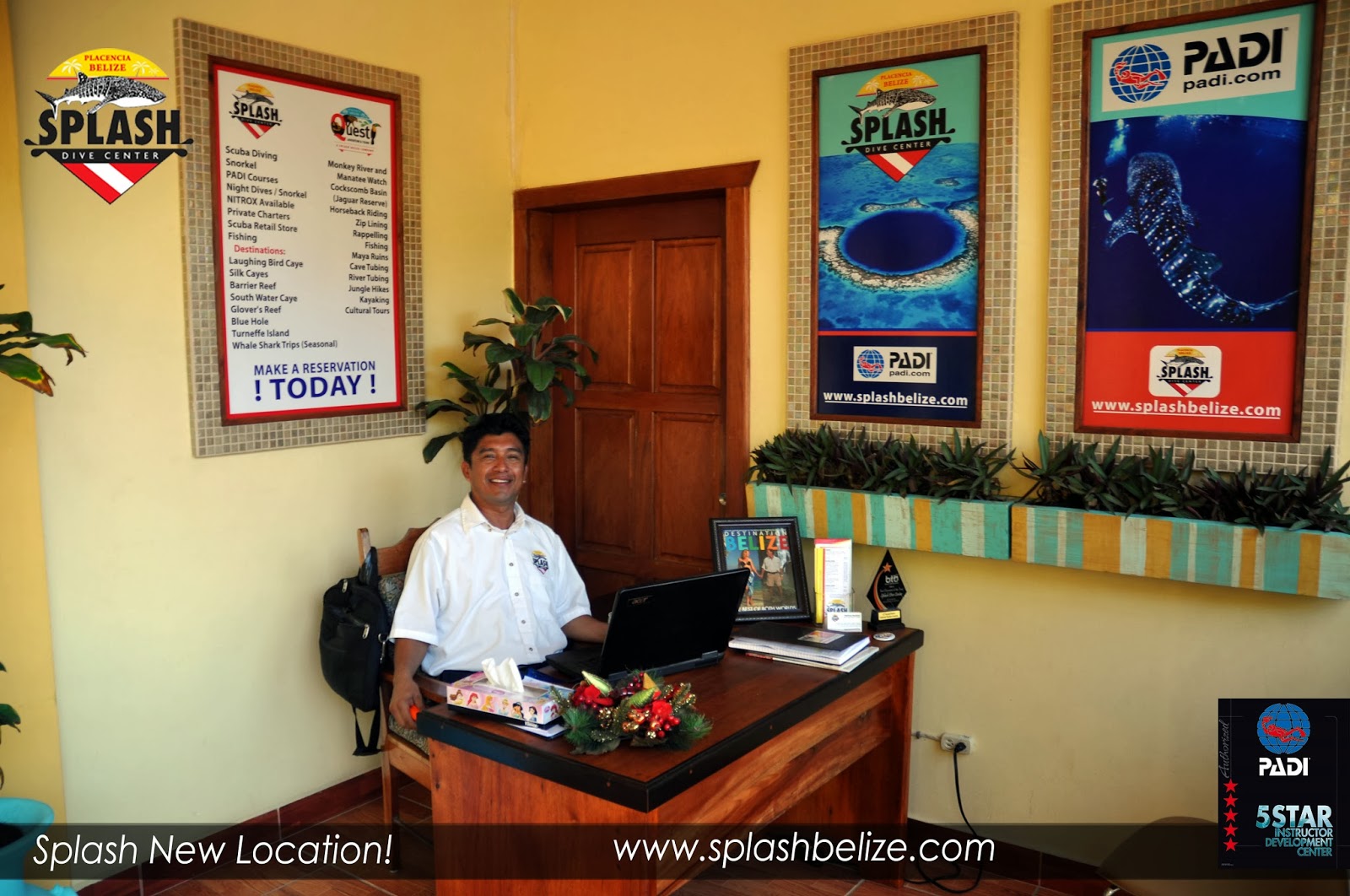 Wendy’s Creole Restaurant specializes in local authentic Creole and Spanish cuisine. Come in and try a Belizean Breakfast Fry Jack, or stop in for lunch and try one of their authentic cow foot soup served with white rice. A true Belizean experience! After a satisfying breakfast, lunch or dinner stop in and visit our trained personnel and find out about our daily tours, and our many scuba diving packages.

Come dive with us! Our friendly professional staff awaits you at Splash Dive Center, Placencia, Belize. Contact Patty at patricia@splashbelize.com and find out more about our second location!

Autumn in Belize: A Thanksgiving Twist


In America as fall sets in the cool air drifts by and the beautiful colors of autumn are everywhere. Two of the best holidays are right around the corner: Halloween and Thanksgiving. Fortunately, both holidays are celebrated extensively in the warm, tropical, Caribbean country of Belize. Thanksgiving is about being with the ones we love, feasting on an abundance of food maybe just a bit too much, and giving thanks for all the blessings we have received. Belize puts a twist to the traditional Thanksgiving feast. 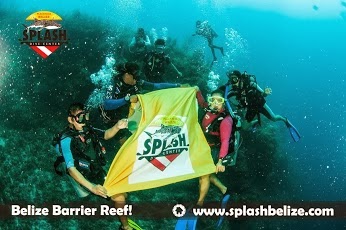 In addition, to celebrating a traditional Turkey day, Belize also gives thanks to the diverse cultures that make up Belize. In November the Garifuna culture celebrates its arrival to Belize and gives thanks to their ancestors. Along, with feasting on turkey, cranberry, gravy, and stuffing you are able to incorporate the many traditional dishes of other Belizean cultures such as the famous rice and beans dinner. If you enjoy the adventure and the diversity that life has to offer you will enjoy a Thanksgiving in Belize.

Vibrant colors continue to surround this marvelous country certainly putting a twist to the fall earth-toned colors: orange, yellow, red, and brown. The temperatures are a bit low to what most Belizeans are use to but the lowest would be at 75 degrees Fahrenheit. Which if you ask me is a warm weather for my t-shirt, shorts, swimsuits and flip-flops. Life continues to blossom all year-round. The trees are filled with colorful green leaves and the chirping and singing of birds can be heard from your bedroom window.

Have a jungle, adventurous, wildlife tour through the mystery forest of Belize. Or simply enjoy the quiet, and peaceful, environment with your family feasting on a grand Thanksgiving meal. Enjoy the Caribbean Sea throughout seasons. A Thanksgiving with a twist! Swim and dive with the most exotic sea creatures imaginable and spend your evening relaxing on the beach in a hammock. Thanksgiving in Belize is a time to share with your family a memorable vacation. 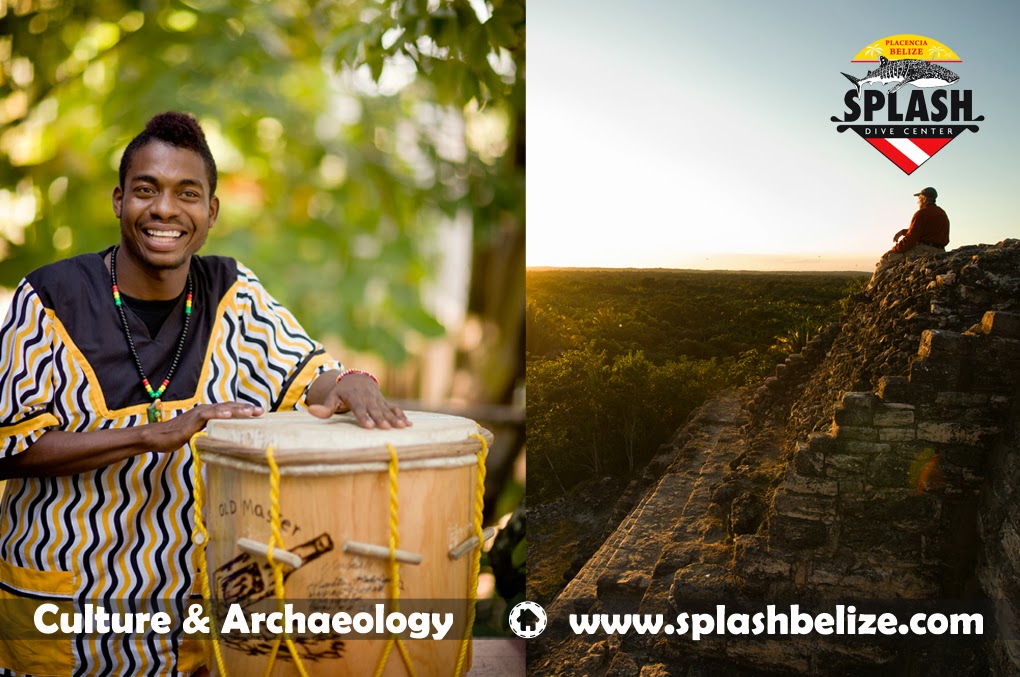 Enjoy a tropical Thanksgiving. Start planning your Thanksgiving vacation in Belize by contacting Patty at patricia@splashbelize.com


The word is that the beautiful lionfish have invaded our natural Caribbean waters. How did this invasion start? Lionfish are native to the Indo-Pacific and are in balance with the ecosystems in that area.  In the Caribbean they are voracious predators of marine life but are not on the food chain for any of our Caribbean fishwere the first to sight the deadly lionfish. The lionfish can easily be identified by its red-and white zebra stripes, with feathery pectoral fins.

So why is that the Lionfish are a danger to our reef?

A lionfish can eat up to 20 small fish in less than 30 minutes and due to their venomous spines they stand fearless against any other sea creatures. The loss of our small fishes in the ocean causes a threat to our coral and reef ecosystem. The only lionfish predators in the Caribbean scuba divers trying to protect the existing ecosystem.

Splash Dive Center has hosted many spear fishing expeditions this year in the hopes of saving the reef.  The lionfish is a delicious delicacy and has gained popularity in many local restaurants in Belize. However, the market for lionfish is greater than Belize. David Johnson, Proprietor of Traditional Fisheries, the only commercial supplier of lionfish in the world was the first to ship the delicious Caribbean delicacy out of Belize to the United States. The demand for lionfish meat is growing in the U.S market. Currently many high-end restaurants in New York City, Las Vegas, Chicago, and Houston are serving lionfish meat.

Eat Lionfish, Save the Reef!

In Belize, lion fish are the only species that regulations allow to be taken with spear guns and the spear guns must meet specific specifications set by the Fisheries Department.

Belize is rich with culture! This small Caribbean country is not only blessed with natural beauty but also with vibrant, colorful, authentic cultures. Each year in the month of November, Belize celebrates Garifuna’s culture, history, and pride. 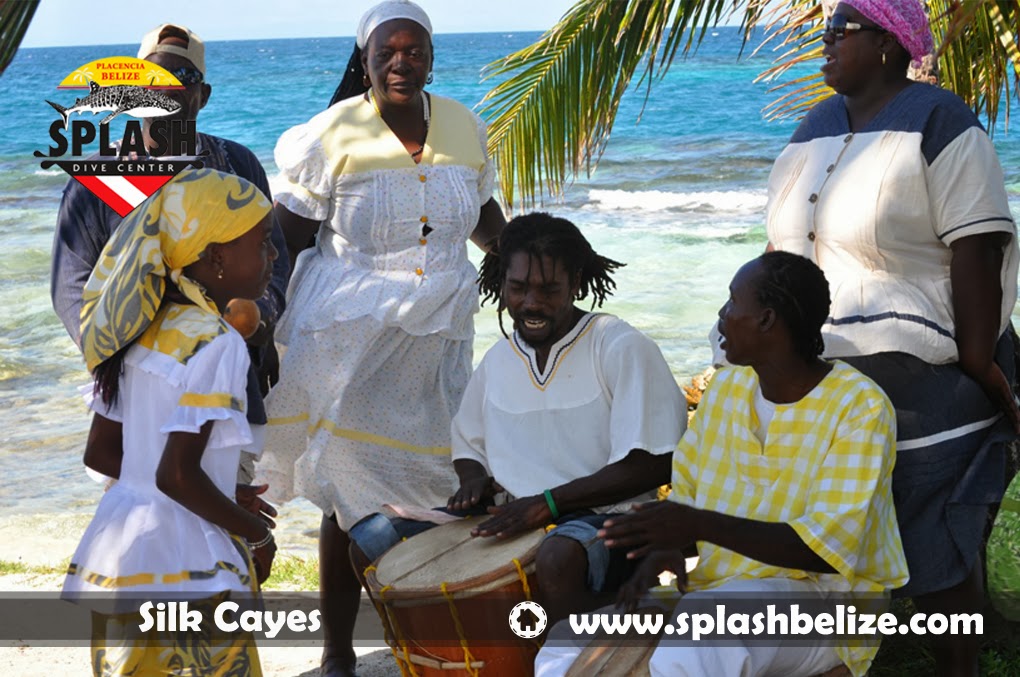 The Garinagu arrived in Belize in the early 19th century and settled on the Southern coast of Belize. Today, most Garinagu reside in the southern part of the country, including Dangriga, Hopkins, Seine Bight, Punta Gorda, and Barranco.

This year the celebration begins with the traditional Miss Garifuna Pageant scheduled to take place on Saturday, October 25 in Belize City. The pageant will be filled with cultural activities depicting the dance, music, and food of the Garinagu. On November 13, the memory Thomas Vincent Ramos will be observed with a torch light parade.

The Garinagu’s traditional clothing is made of bright colorful checkered material, often containing the traditional colors yellow, black, and white. On Garifuna Settlement Day many Garinagu women can be seen wearing their traditional dresses along with colored headpieces in celebration of their culture. The Garifuna flag is often flown on this day with reverence and pride. The flag consists of three horizontal strips of black white and yellow.

The main event that takes place each year is the early morning re-enactment of the arrival of the Garinagu’s to the southern coast of Belize in dugout canoes. A traditional catholic mass follows immediately after the re-enactment. The mass is certainly a celebration of the Garifuna culture! The priest celebrates the mass in the Garifuna language, the choir sings alongside the rhythm of the Garifuna drums, and everyone in the community attends wearing their traditional dresses.

All the activities and events leading up to Garifuna Settlement Day depict the Garinagu’s traditional culture. The events are vivacious, colorful, and historical!

The Garifuna culture is known for its delicious traditional dishes. The most popular dishes are the cassava bread, and the Hudut. Our favorite is the Hudut, it is a creamy fish soup made with coconut milk, often served with mashed plantain.

If you have never experienced the Garifuna culture you must visit Belize in November.  The sound of the Garifuna drum is rhythmical and will have you dancing the fun, traditional punta dance.

Immerse in our culture and book your next Belize dream vacation with us. Contact Patricia Ramirez at patricia@splashbelize.com or visit our webpage at www.splashbelize.com for more information.
Posted by Unknown at 06:13 No comments:

Have you ever wanted to travel to a tropical paradise but had so many questions about the destination you are heading to?

Placencia is known to be the most laid-back, tranquil environment in Belize, located just a short boat ride away from many of Belize’s well-known marine reserves such as: Gladden Spit and Silk Cayes, South Water Caye, Glovers Reef, Turneffe Atoll and Belize’s Barrier Reef. 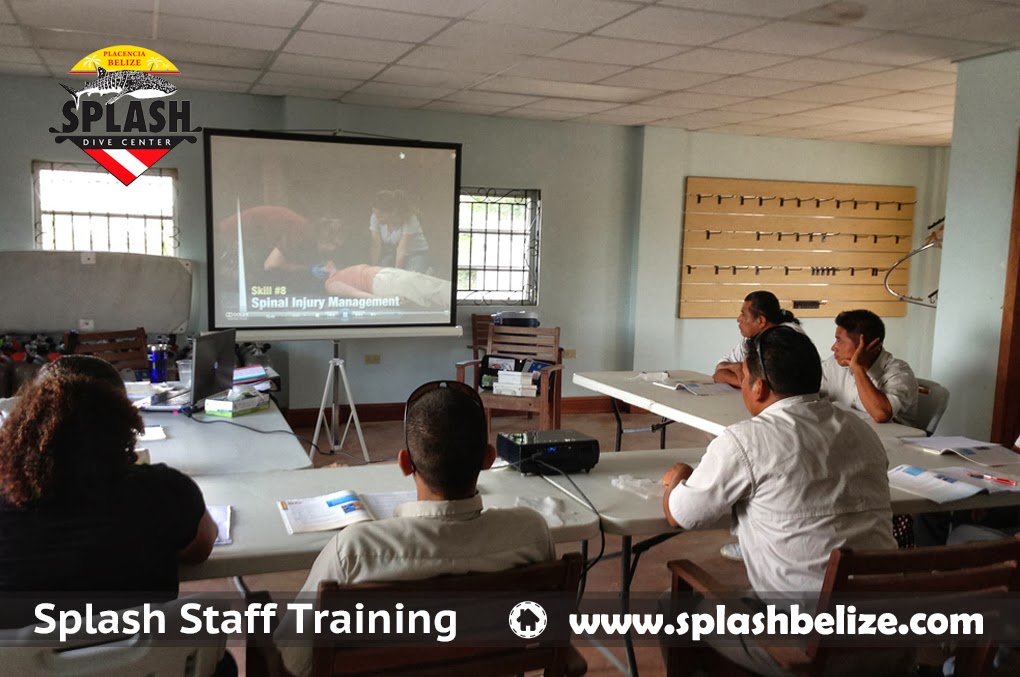 Safety is Splash Dive Center’s #1 goal, a PADI resort facility, encompassing the most experienced and qualified staff in the region. Continue your diving education or learn to dive with a very professional Instructor. Sign up for some of the tours and package deals offered,  led by dive masters who are licensed tour guides who are both knowledgeable and make it fun.

A few of Splash Dive Center’s most famous ‘Big 6’ special dive packages include:

Mix it up! Splash Dive Center also offers a range of inland tours, including but not limited to: 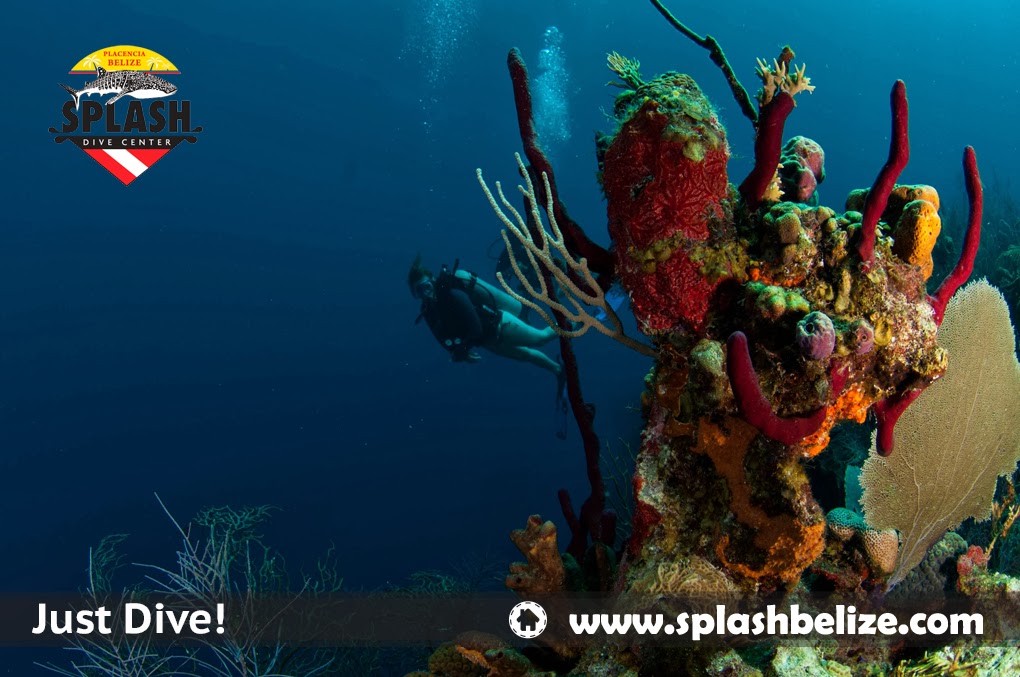 We had the opportunity to dive with Splash Dive Center and can still remember the details of my vacation in Placencia, Belize. In simple words: it is more than a dive center: ‘it is home away from home’.

Start planning your stay by contacting Patty at patricia@splashbelize.com
Posted by Unknown at 11:34 No comments: