Belize’s coral reefs are the most diverse and beautiful of all marine habitats which include both hard and soft corals among other marine life.  The sub-tropical climate here provide ideal conditions for the formation of corals which thrive in shallow, clean water, plenty sunlight and temperate waters between 16 and 30 degrees Celsius and an abundance of food sources such as plankton and baby shrimps. 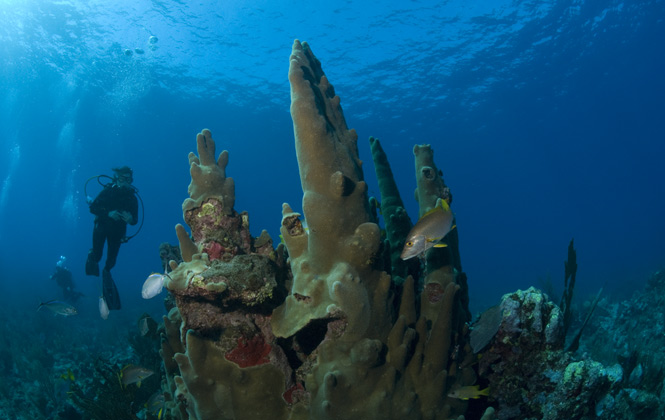 Undeniably, the geographic formation of Belize’s landscape, along with the moderate climate, has favored some of the most astounding natural coral reef systems that took several millenniums to form. Over thousands of years, calcium carbonate skeletons of tiny coral polyps are collected together, layering over skeletons of past coral marine life.  As each generation of polyps dies, the corals grows a bit larger giving rise to a cluster of slow growing hard corals.  Soft corals, such as gorgonians, are also composed of some rigid calcium carbonate as hard corals.  Although well rooted, and with no exoskeletons, soft corals such as sea fans and sea whips move with the waves of the water.

Sea fans, sea whips and sea plumes are all soft corals from the gorgonian family.  The common sea fans are often sighted in a variety of brilliant colors while the fan-like polyp colonies are normally erect, flattened, and branching.  Carnation corals are natural charms that never fail to draw attention.  Quite easily, these are one of the most beautiful that comes in a spectacular range of colors.  No less impressive are the tree corals sighted through the vast reef systems in the cayes, shallows, atolls and drop-offs.  The beauty and biological diversity in these life forms are a true marvel.  Coral might be beautiful to look at but should not be touched.  Watch out especially for the fire corals from the Millepora family ranging in variety of shapes, including stick formations, branch formations and even those that resemble underwater plants. Nematocysts on the tentacle skin of these corals release toxins which create a burning sensation when rubbed against. Just about any imaginable hard and soft coral is sighted in Belize’s reef systems whether diving or snorkeling around the atolls or other islands.  The sheer numbers of and different types of coral, sponges, and fish, makes scuba diving all the more exciting and enjoyable.  A proliferation of hard corals easily seen include the brain coral, staghorn coral, elkhorn, rose coral, club finger coral, rough and smooth starlet and the knobby candelabra. The brain coral are common but spectacular formations that may take several hundreds of years to form and may grow as high as six feet.  Corals feed at night by extending their tentacles to catch their food and use the tentacles as protection during the day. Hard corals, however, enjoy a symbiotic relationship with tiny algae which live inside their skin. These algae use the coral as a safe place to live, and in return, can provide the coral with most of its energy.

Staghorn corals and elkhorn corals are among the most important reef building corals sighted anywhere in the reef.  These hard coral colonies, although structurally complex, are incredibly fast growing with an average growth rate of 2 to 4 inches per year and may span as much as 10 ft wide.  This magnificent spread makes excellent homes for lobsters, parrot fish, snappers and other reef fish.

With such a vast and complex coral reef system that includes a barrier reef straddling the entire coast with teeming inhabitants, Belize’s reef is a universe of its own.  With top dive sites unmatched anywhere, Belize is well poised in the Blue Caribbean for extraordinary diving. To book any diving trip in Belize contact Patricia Ramirez at patricia@splashbelize.com
Posted by Unknown at 04:24 No comments:

Belize’s amazing Barrier Reef is any avid diver’ or snorkeler’s aquatic playground that provides the ultimate experience. Divers from all over the world are discovering Belize’s exotic marine life and pristine waters and attest to the barrier reef being a colossal aquarium of exotic critters, graceful invertebrates, and colorful sea life. Spanning most of Belize’s coastline with 185 miles, this reef is the longest in the Western Hemisphere.

Belize has a remarkably high concentration of marine life. Schools of exotic fish, colorful coral gardens, grottos and walls lined with sponges appearing to have internal bioluminescence, caverns decorated with stalactites and ocean critters are ever present. More than 50 species of corals and 400 species of fish call these waters home including the horse-eye jack, barracuda, yellowtail snapper, pompano and goliath grouper often seen cruising the reef.

With spectacular strings of unspoiled islands atop sparkling clear waters and three atolls, Belize is a mecca for divers and a water-borne Garden of Eden for water sports enthusiasts.

Hol Chan Marine Reserve, an offshore caye, is an excellent diving area easily accessed from San Pedro and Caye Caulker – two formerly sleepy fishing villages offshore and now popular tourist destinations and hub for divers. Inside the reef, coral rises to the surface in a long snaking ridge. Outside, the reef gently slopes down to some 40 feet, revealing many shallow water corals and a plethora of gorgonians. The sloping ledge is deeply cut with cracks and crevices winding to the reef’s outer edge where a great wall drops to the depths of the sea.


A truly fascinating phenomenon at Lighthouse Reef is the iconic Blue Hole. A titanic cave, once dry as demonstrated by the presence of stalactites, has been submerged since the end of the last Ice Age. A portion of its ceiling collapsed at some point in time, creating a blue hole more than 400 feet deep and nearly 1,000 feet across. At 100 feet, the wall gives way to a deep undercut. At a depth of 130 feet, the softly lit cavern’s 25 feet and upside-down monoliths hang from the ceiling. The sight of stalactites, silhouetted against the blue glow of the filtered light coming from beyond the ledge, is no ordinary experience. Some are so large that five divers side by side would not be enough to encompass them.

For all these reasons, Belize is the ultimate archipelago of natural and unspoiled beauty like a shining gem in the sun and mecca for divers from all over the world. But don’t take our word for it, be on the inside of Belize’s underwater paradise!
Posted by Unknown at 05:25 No comments: